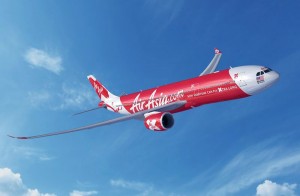 This is the largest single order to date for the A330 Family and confirms AirAsia X’s position as the biggest A330 airline customer worldwide, having now ordered a total of 91 aircraft. The announcement covers the firming up of a Memorandum of Understanding (MOU) for 50 A330neo signed during the Farnborough Air Show in July 2014, plus an additional five aircraft. Deliveries of the newly-ordered aircraft will begin in 2018.

“This latest deal with Airbus will enable AirAsia X to consolidate its growth rate in 2015-2017 before ramping up deliveries from 2018 onwards.” said Tan Sri Tony Fernandes, Co-Founder and Director of AirAsia X. “The A330 has proven itself to be exactly the right aircraft for our business model, combining low operating costs, long range flying capability and high levels of comfort.”

“This order from AirAsia X is a major endorsement of the A330neo as the most cost-efficient aircraft in its size category,” said John Leahy, Chief Operating Officer, Customers, Airbus.