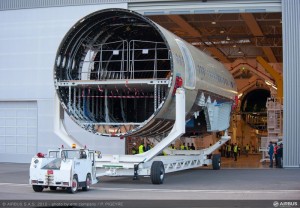 Final assembly of the first A350 XWB is now underway at the brand new final assembly line in Toulouse. This latest step in the A350 XWB’s progress is achieved as Airbus starts joining the 19.7 metre long centre fuselage with the 21 metre long front fuselage.

This first A350 XWB airframe will be used for the static structural tests that all new aircraft undergo as part of their certification process. The assembly of the first flying A350 XWB, MSN1, will start during summer.

The centre fuselage was delivered to Toulouse on Wednesday 4th April 2012 by Beluga from Airbus in St Nazaire, France. The front fuselage was previously delivered from St Nazaire to the A350 XWB final assembly line on the 23rd December 2011. Delivery and installation of the aft fuselage from Hamburg, Germany will take place in the coming weeks, followed by the wings delivered from Airbus’ wing assembly site in Broughton, UK. 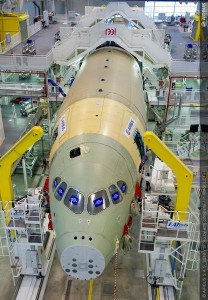 The A350 XWB fuselage is made up of three main sections – front, centre and aft. These will be joined together at the first main assembly station, Station 50. The nose landing-gear is also joined here. Once this stage is completed, the fuselage is transferred to Station 40 where the wings and tail sections are joined.  In parallel to this, cabin installation will be carried out simultaneously to the wing-fuselage join up, as well as the “power on” of the aircraft systems. In this way, functional tests can start earlier than on previous programmes.